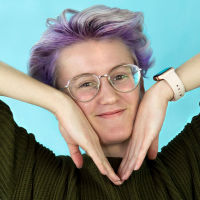 Back in June, Adobe XD rolled out the scroll group function, which allows users to scroll certain sections of an interface. It’s perfect for lists, map previews, or horizontal websites and also works wonders with merged shape masks. Uniquely shaped scroll groups are an excellent way to simulate scroll bars or fun, interactive segments like oversized emotes, which we cover in our quick video on these scroll groups.

Your base layer consists of the two whites of the eyes of our eye emote, and save these for later—they will make up the merged shape that masks the pupils.

Group the pupil shapes and overlap them with a shape that’s larger than the canvas. This larger shape will ensure that Adobe XD recognizes that there’s content that needs to be revealed when the user scrolls. Without this shape, the pupils won’t move.

Reuse the shapes from the whites of the eyes and merge them in the pathfinder tools—otherwise known as Add. Use this merged shape to mask the group where the pupils and the oversized rectangle are.